Home Maharashtra Mumbai 5000 GPs back in their clinics

Dr Chandrashekhar Taware, member and former president of Mahim-Dharavi Medical Practitioners Association, said that in alone over 200 GPs have reopened their clinics


While a government diktat to private doctors to give up their wellpaying jobs and lucrative practices to join the state’s battle against Covid-19 has evoked poor response, it has achieved one thing – it has sent the general practitioners (GPs) scurrying back to their clinics.

According to figures made available by the Directorate of Medical Education and Research (DMER) to Mirror on Wednesday evening, close to 5,000 GPs are now back at work, considerably reducing the workload on public hospitals, isolation facilities and Covid care centres.

Though it is apparent that a majority of the GPs — who had shut their clinics after instances of doctors catching the infection increased – have returned to work to avoid duty at government hospitals, the DMER is okay with that because the GPs anyway form Mumbai’s first line of defence in a health crisis.

Click here for latest updates on the coronavirus pandemic

Earlier this month, the government had asked around 25,000 private medical practitioners in Mumbai to report to work at BMCrun hospitals and Covid care centres with immediate effect. The doctors were told that they must spend at least 15 days at the hospital they will be posted at. Those failing to report to the assigned hospital would face action, including revocation of the license to practice.

Very few private doctors, except GPs, responded to the government’s order. The DMER, in the past couple of weeks, deployed flying squads to cross-check the GPs’ claims that they had reopened clinics. “By and large, our finding is that the GPs are back. Some had problems with the housing societies they operate out of. But those problems have been resolved,” said a source.

The GPs have now been asked to click selfies with their patients every day and submit them with DMER.

Director, DMER, Dr T P Lahane said the flight of GPs had left a big gap in Mumbai’s healthcare delivery apparatus, increasing load on public hospitals, fever clinics and isolation centres. He said the absence of GPs had also led to patients landing in hospitals in critical condition, leaving doctors with very little time to help them. “The first line of defence was gone and patients were not getting timely advice,” he said.

Dr Lahane said the GPs’ main concern was the shortage of (). “We have assured them that the government will provide them PPEs. A member of the state Task Force, Dr Shashank Joshi, will train the GPs in identifying suspect Covid cases and in providing preliminary treatment,” he said. 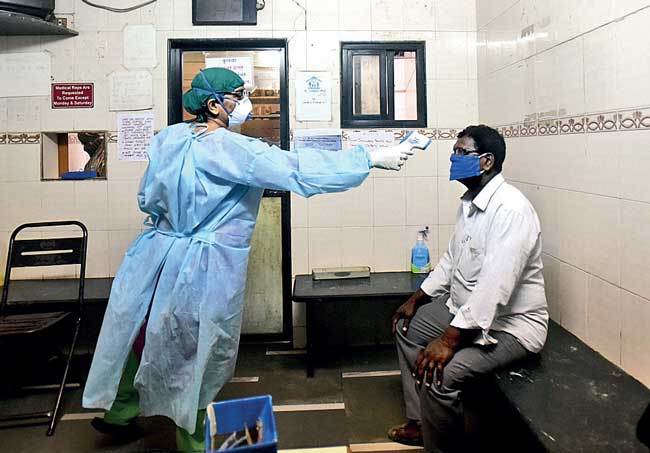 Around 5,000 doctors are needed in the fight against Covid-19; PIC: NILESH WAIRKAR

Dr K R Dhebri, a senior family physician based out of Bhuleshwar and a member of General Practitioners Association, said: “Many of our members said they would prefer to start their clinics rather than work at Covid care centres. Their main concern was the safety of their family members. Many of them have elderly parents at home,” he said.

Dr Chandrashekhar Taware, member and past president of Mahim-Dharavi Medical Practitioners Association, said that in Dharavi alone over 200 GPs have reopened their clinics. “Last month, only six clinics, including mine, were open,” he said.

Apart from this, over a thousand GPs have signed up to work at and state-run Covid care centres. According to state government officials, 5000 doctors are required to man over 7000 beds at various isolation facilities and Covid care centres in the city.

In Pictures: Guarding the COVID19 frontlines: Men and women in uniform

The ones who can’t stay at home

They are putting their lives at risk as they take guard on the frontline of the fight against COVID-19. Men and women in uniform who are putting their duty before their safety. Mirror photographers chronicle their life in this lockdown – where they have to handle everything from agitated residents to anxious migrants and even errant pranksters. Photo by Satyajit Desai/ MMCL

Stories of resilience and determination

Around 100 cops were deployed to man the approach roads. The police identified the vulnerable areas like Janta Colony, Walmiki Nagar, Golfadevi temple road and Adarsh Nagar to seal them off with the help of BMC. “We made sure that nobody could go out or enter the contaminated zone. The police kept a watch on the roads that led to the sea so that people did not use the beach from Koliwada to Prabhadevi,” said Sunayana Nate, an inspector from Dadar police station. Photo by Nilesh Wairkar/ MMCL

India is between Stage 2 and 3 of coronavirus pandemic with large number of cases being found in particular areas, the Union Health Ministry said on Monday. The ministry concurred with the director of the All India Institute of Medical Sciences (AIIMS), who had said that localised community transmission is being observed in some pockets of the country. Photo by Sachin Haralkar/ MMCL

More than 200 enclaves have been marked as containment zones and sealed off from the rest of the city. No-one is allowed to enter or leave these zones except for those providing essentials such as food and medicines. In some places, residents are given rations to last 21 days, while at others, designated security guards buy people’s supplies in bulk. All the zones are sprayed with disinfectant every few days. Photo by Deepak Turbhekar/ MMCL

1838 – that’s the number of cases the Mumbai police have registered against those who have flouted the lockdown conditions, without good reason. Given the rapid spread of the virus – Maharashtra has now recorded over 1000 COVID-19 positive cases – police continue to check on those who violate the lockdown, filing cases against those who do not manage to back up their claims with enough proof. Photo by Satyajit Desai/ MMCL

Out of all the cases registered by the Mumbai police, many people have been charged under section 188 for violating provisions of the lockdown. Over 1400 were let off after a warning while over 100 are absconding. In Mira- Bhayandar, after it was noticed that people were using the most flimsy excuses to step out of their homes under the pretext of buying groceries, the municipal corporation put out an order directing all stores to stay shut between 5pm and 9pm, except pharmacies. The idea is to reduce the number of people who want to step out in the evening for a joyride using ‘grocery purchase’ as a handy excuse. Photo by Satyajit Desai/ MMCL

A week after the BMC declared eight buildings at Bimbisar Nagar in Goregaon (East) a Covid-19 containment zone, Monday, April 6, brought some good news for residents. No new cases have been reported from the area, seven of the eight buildings were freed from the restrictions and only one building remained sealed off, police sources said. The building that remains sealed is the one where three residents had tested positive, prompting the creation of the containment zone. Located off the Western Express Highway near Mahanand Dairy, Bimbisar Nagar comprises 31 buildings. The eight buildings that were sealed off comprise 336 flats. Photo by Satyajit Desai/ MMCL

The BMC, with the help of the police, has put together ‘flying squads’ for night patrol of the city’s various containment zones – enclaves which have been sealed off to prevent the spread of Covid-19. While civic officials and policemen are posted there during the day the civic body also wants a presence at night, to keep people from venturing out after dark. Photo by Sachin Haralkar/ MMCL

What flying squads will do

Prashant Gaikwad, Assistant commissioner of BMC said, “These squads will comprise BMC officials and policemen. They will move around at night to check if anybody is trying to enter or leave a containment zone or is not practising social distancing.” Anyone with a home-quarantine stamp on their hand who is found roaming the streets will be institutionally quarantined in a hotel or lodge set aside for the purpose. Photo by Sachin Haralkar/ MMCL

No inquest needed for coronavirus-related deaths

According to a circular issued by the Maharashtra Home Department on Tuesday, the decision not to conduct the inquest, which literally means–a judicial inquiry to ascertain the facts relating to an incident — was taken keeping in mind that the procedure could expose the doctors, nurses, and policemen to the virus infection. Mumbai police spokesperson Pranay Ashok told Mirror Online that the Home Department order is in line with the guidelines issued by the Ministry of Health and Family Welfare on Dead Body Management in case of coronavirus deaths. Photo by Sachin Haralkar/ MMCL

7 signs your best friend is in love with you

COVID-19 has led to the rise of local superstar chefs: Chef...