Award-winning wildlife photographer KA Dhanuparan recalls the “special moment” when he caught a first glimpse of the Narcondam hornbill with its velvet-black plumage and over-sized yellow beak.

An endangered species, the bird is endemic to the Narcondam Island in Andamans. It is where Dhanuparan headed to on a two-day birding and photography trip to document its nesting activity. 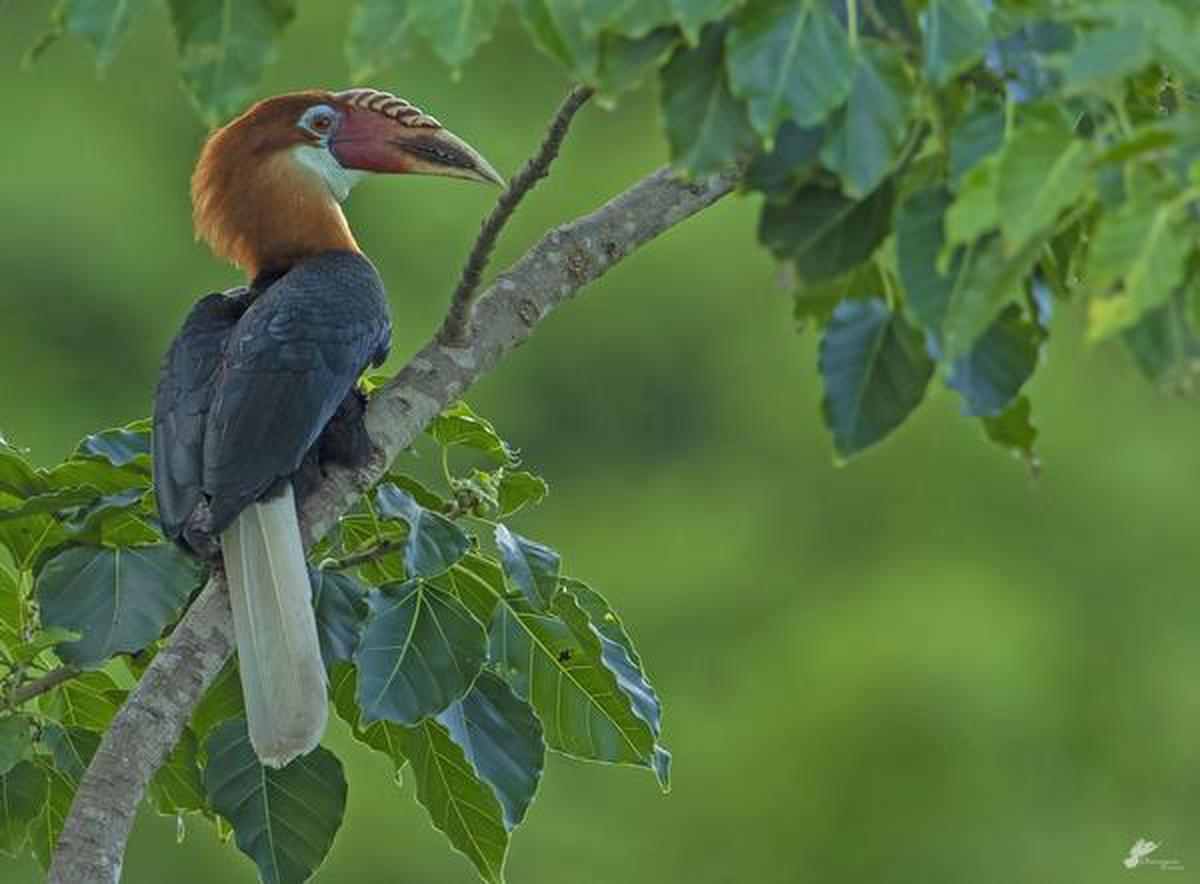 “From Havelock island, it took us eight hours to reach Narcondam. First, I saw a male bird with a prominent rufous head and neck, and then a female bird that was fully black. Soon, they came out in hundreds. They were flying and feeding on berries and fruits from tall trees,” he says.

However, access to the tiny, dormant volcanic island of Narcondam, which spans an area of 6.8 sq.km, is restricted, since it is a protected habitat for the hornbills. It is maintained by the Department of Environment and Forests of the Andaman and Nicobar Islands.

Dhanuparan’s self-proclaimed love for photographing hornbills led him to Narcondam. So far, he has captured the Malabar grey hornbill, Malabar pied hornbill (both endemic to the Western Ghats), the Great hornbill and the Indian grey hornbill. His photo of a Great hornbill, seated on a tree with its magnificent wings outstretched opposite a Nilgiri langur, earned him a runner-up spot in the Natural History Museum’s Young Wildlife Photographer of the Year competition in 2017. Another photo of a Great hornbill holding a prey in its beak made it to the cover of Sanctuary Asia magazine in 2013. “I spent two days at the island photographing the bird. Access to the island is restricted because it is a highly protected habitat,” says Dhanuparan.

Shirish Manchi of Salim Ali Centre for Ornithology and Natural History, in a YouTube uploads on conservation, explains how Narcondam hornbills faced threat of extinction due to habitat loss and hunting. If not for concerted conservation efforts, it would have been impossible to boost their numbers from a mere 360 birds in 1999 to over a thousand now.

Yet, habitat destruction remains the biggest threat to hornbills around the world, according to Nilgiris-based birder Aggal Sivalingam, where Great hornbills can be seen in places like Mulli in Coonoor, Mamaram in Kotagiri and in Masinagudi.“They need tall fruiting trees for nesting and breeding. Their calls are loud and aggressive, especially to send an alarm to the flock when they spot birds of prey,” he says.The Narcondam hornbill is smaller in size and is not loud, unlike its cousins, points out Dhanuparan. However, being endemic to an isolated, uninhabited island, the Narcondam hornbill still faces the threat of extinction in the event of a natural calamity causing a species wipe-out.

“Those two days with the birds were unforgettable. I hope they are there when I go back someday,” adds Dhanuparan, who is currently at the Anamalai Tiger Reserve filming its bio-diversity.

Iconic musician Lenny Kravitz to release his memoir in 2020

Indian Cooking Tips: How To Make Amchoor Powder Or Masala

A new 5-minute test may predict dads’ parenting skills before a...

As China asserts its dominance over post-pandemic world, countries unite against...