Farmers are the only businessmen today who cannot claim input tax credit (ITC) on the sales they make.

Agriculture is a unique business that not only has high production as well as price risk, but also one where everything is bought retail and sold wholesale. This reality, moreover, extends even to Goods and Services Tax (GST): Farmers are the only businessmen today who cannot claim input tax credit (ITC) on the sales they make.

Bhagirath Choudhary, founder-director of the New Delhi-based South Asia Biotechnology Centre, was recently shocked to pay 18% GST on pheromone traps and lures that are used by farmers to attract insect pests. “These are required for monitoring and trapping of adult male moths to prevent mating and laying of eggs by the females. We advise spraying of chemical pesticides only as a last resort, when the number of moths caught exceeds a certain threshold level” says the 45-year-old, whose agri-technology dissemination organisation claims to have reached out to nearly 15,000 maize farmers across India and distributed 2,500 traps-cum-lures as part of an educational programme to control the dreaded fall armyworm pest.

But 18% GST is levied not just on traps and dispensers impregnated with synthesised mimics of sex-attractants released by female insects. Even regular agro-chemicals/pesticides and safety kits (eyewear, masks and gloves) necessary to spray these attract this duty. The GST rates are slightly lower, at 5-12%, for botanical and biological insecticides such as Azadirachtin, Nomuraea rileyi, Metarhizium anisopliae and nuclear polyhedrosis virus formulations, which are also used at very early stages of infestation.

“When I first bought 50 traps and an equal number of lures containing pheromones, the bill came to Rs 2,540. Only after checking the invoice did I discover that it included a GST amount of Rs 387.46. That made me curious and find out more. As it turned out, there is GST on every farm input, barring seed and animal/poultry feed. Even on government-subsidised fertilisers, you have to pay 5% GST,” notes Choudhary, who is himself the son of a farmer from Dudiyon Ki Dhani, a hamlet in Bilara tehsil of Rajasthan’s Jodhpur district. 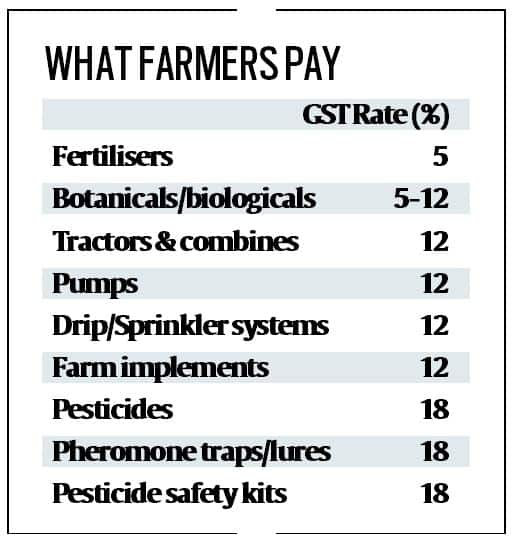 The problem, however, is not with GST per se. The real issue is that for the GST paid on the purchase of any input – whether fertiliser, pesticide, pheromone trap, tractor, drip/sprinkler irrigation systems or other agri equipment – the farmer has no means to using it for reducing his tax liability. This is not just because most farmers are ignorant about ITC/GST and cannot afford to hire the services of chartered accountants. The actual reason is simply that all farm produce attract zero GST. Hence, there’s no way a farmer can claim credit to the extent of GST paid on purchases when he makes a sale.

“It’s one thing for the farmer to pay GST on soap, toothpaste, biscuit, television or two-wheeler, which are all final consumption items. But when he buys fertiliser or pesticide, these are being used for growing crops, not consumption. The farmer’s inability to set off the taxes paid on inputs employed in the production process violates the letter and spirit of GST. In every other business, the goods used as intermediates are eligible for ITC. The same basic foundational principle ought to be extended to farm inputs,” points out Choudhary.

The right way to address this anomaly, according to him, is by exempting all farm inputs from GST. Farmers can, in theory, reap the benefits of ITC if their produce is also brought under GST. But doing that would impose unnecessary procedural burden, similar to what lakhs of micro, small and medium enterprises have already experienced post GST.

“Agro-chemical companies and tractor makers don’t mind paying GST. In fact, they want this, in order to be able to claim credit for the GST paid on active ingredient, packaging material or components. But why is only the farmer now being forced to shell out taxes on which there is no set-off facility? The government should exempt at least recurrently used farm inputs from GST and device a mechanism for refunding manufacturers on the taxes paid by them, which will otherwise be loaded on to the farmer,” he adds.

“If you add all other inputs — including electric/diesel pump-sets, micro-irrigation systems and agri implements (even Happy Seeders touted as a solution to the problem of paddy stubble burning attract 12% rate!) — the total GST being paid by farmers, on which they cannot claim ITC, would probably cross Rs 15,000 crore,” reckons Chaudhary.

That’s quite a substantial set-off not happening, about which few farm leaders or politicians claiming to have agrarian background are even aware.