From spaceships to mythology, director Arati Kadav’s debut feature, Cargo, is a unique and bold attempt at exploring science fiction in Bollywood

In Netflix’s latest film, Cargo — set in the near future — you’re aboard Pushpak 634A, a spaceship with a curious purpose: to offer ‘post-death transition services’. Here, human ‘cargo’ arrives ever so often, to be recycled and readied for rebirth. One by one, men and women — a few electrocuted, others stabbed in the back, some victims of accidents — arrive through a shaft, bewildered at being welcomed by a man in an astronaut suit. Pushpak 634A’s only occupant, the reclusive demon, Prahastha (Vikrant Massey), is famed for having done his job long and well, after a peace treaty was signed between humans and demons.

As he is about to retire after 75 years aboard the spaceship, he is joined by young, enthusiastic demon astronaut Yuvishka (Shweta Tripathi), who brings life and special healing powers, thus stirring up big questions about the circle of life, what we take with us and what we leave behind. There’s fun to be had, too. Shurpanakha is a pop star singing an instantly hummable song, demons have their own universities and can get cosmetic treatments to look more like humans. Fascinated with the afterlife

With ingredients like myth, science fiction, melancholy and humour, writer and filmmaker Arati Kadav has created a delectable film with roots in her childhood. “Growing up in Nagpur, I was always excited about fantasy and wrote stories for many competitions. I was obsessed with afterlife myths,” says the director on a Zoom call, along with Tripathi. “Science fiction is just a prism to reflect on reality.”

The engineer-turned-filmmaker struggled for eight years, making short films on similar themes, before her first full length feature finally got the green signal. “Shweta came home one day with another writer interested in sci-fi. I loved how intelligent Shweta is and how she responded not just technically but emotionally to these concepts. The film works because Vikrant and Shweta understood the layers in the story,” says Kadav.

Meanwhile, for Tripathi, it was “love at first sight”. Cheerfully flashing shiny astronaut studs in her ears that she found at Kadav’s home, she believes that “no one sees the world the way Arati does. You could be eight or 80, you will take away different meanings from the film.” 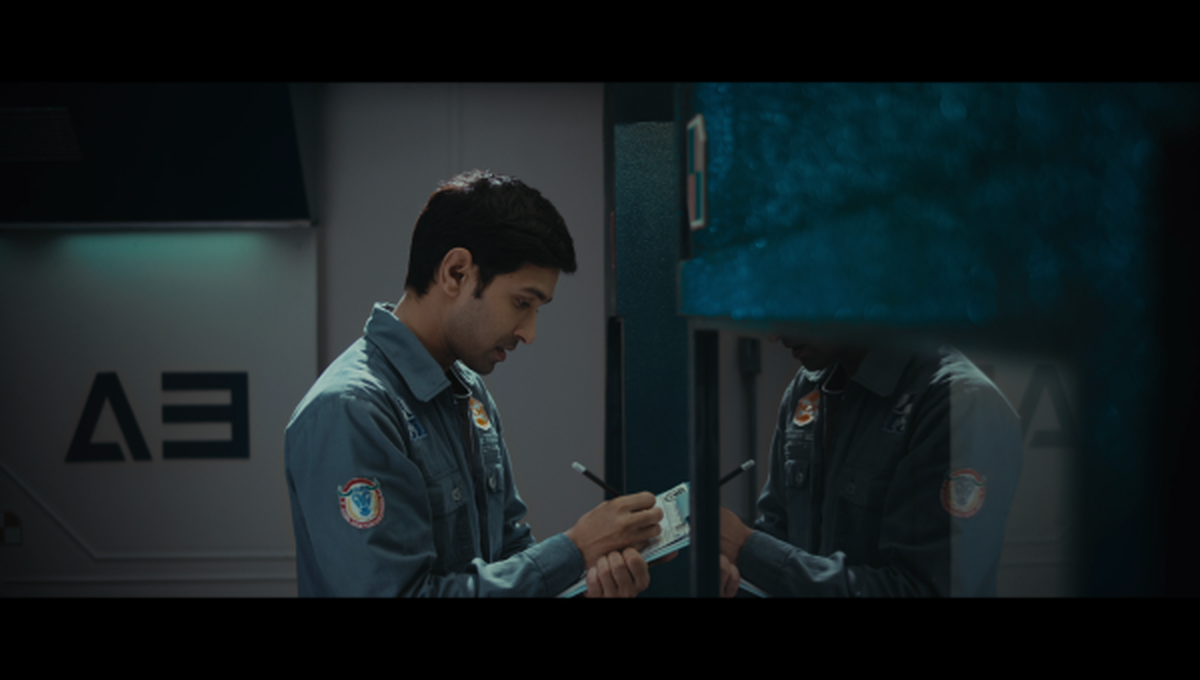 The fact that Cargo is a low-budget sci-fi film made by a woman marks many firsts for Indian cinema. It has also travelled to over 25 film festivals (explaining the delay in its release), including the Mumbai Film Festival (MAMI) and South by Southwest Film Festival (SXSW), to generous response and favourable reviews. “Science fiction is perceived as an expensive genre. I didn’t want it to be a copy of a Hollywood film. Kaushal Shah [DOP] and I had a specific vision. What you don’t have in money, you compensate in colours and a rich visual vocabulary. A lot of credit goes to production designer Mayur Sharma,” says Kadav, adding that they went with a retro sci-fi look “because I love the clunky and tactile, the metallic nature of it”. “Touch-screens are boring. The spaceship had to be an organism,” she adds. And so it is — breathing, contracting and lengthening like the movements of a jellyfish.

Releasing during the pandemic, when many of us are grappling with existential questions, Kadav says viewers are ready to ponder the issues the film raises. “In our capitalistic society, we run after permanence and the big things, but the film is about valuing the transient phases and the little things. It is about loneliness, empathy and being more kind to each other,” she says.

Tripathi is also hoping that the conversation moves away from the negativity that the death of Sushant Singh Rajput has brought on. “We once shot for 36 hours non-stop, when Arati’s daughter was just a year old, since we had to wrap up the shoot two days before schedule. It is not easy; so much effort goes into filmmaking. But it is sad that the discourse is reduced to drugs and gossip,” says the Masaan actor.

Tripathi’s other recent, well-received project is the lockdown-themed web series, The Gone Game, on Voot. “Shooting at home made me appreciate the crew so much. Learning to manage costumes, props, food, and shooting was a great learning experience. My husband shot my part, but I miss being on set and the energy,” she says. The actor hasn’t had much time to catch up on shows herself, and has just begun the new Netflix show Away, starring her favourite actress, Hilary Swank. She is also excited to be working on two new web shows, to be announced soon. Kadav, on the other hand, has been watching the shows Dark and Kingdom, and working on two other sci-fi projects.

Though filming for Cargo wrapped up 30 months ago, Tripathi says she is still learning things about it. “I realised that everybody has Yuvishka’s power to heal; we just don’t practice it enough.”

Cargo is now streaming on Netflix.

Kanye West to Demi Lovato: Hollywood stars who opened up about living with bipolar disorder