Home Astrology Religious Practice As Chennai malls re-open, here is what the new shopping experience is...

Is shopping at the mall like going to the ball as Cinderella: in and out with a deadline in mind? Find out as we mall hop, while following COVID-19 guidelines

Ask S Lalitha what she longs for and the KK Nagar resident says, “I have missed going to Spar Hypermarket in Forum Mall to get my monthly groceries…” Human desires have become astonishingly simple under the pandemic.

Until five months ago, the city’s shopping malls were prime hangout spaces, bustling with hordes of people — shopping, catching a late afternoon movie, attending an animé convention or simply enjoying open air concerts. But all that changed with the lockdown and the malls have been closed for operations since March 25. However, on August 30, at around 6 pm, the Government announced that malls can function from September 1. Under Unlock 4.0, they are now finally open.

But, as excited as Lalitha is to shop at her favourite supermarket again, she is also cautious: “Before visiting, I want to make sure that they are following all the necessary precautions to curb the spread of the virus.” But she is not the only one who has these questions. Here is a lowdown on what a trip to the mall now entails.

At Forum Vijaya Mall in Vadapalani, visitors are required to book a time-slot prior to their visit. This can be done from its social media handle or from the website.

Velachery’s Phoenix MarketCity, meanwhile, has launched an application called ‘Nhance by Phoenix’. The app, which can be downloaded from Google Play store and App store, has features such as pre-booking entry, locations of stores (to reduce ambling), quick and contactless payments, and even pre-ordering food from anywhere in the mall.

Parking lots are now being closely monitored. At the entrance, customers are made to undergo a series of security, hygiene and temperature checks. Customers are urged to download the Aarogya Setu app on their mobile phones, before heading to the mall. Washrooms with red and green markings at Forum Mall, Chennai

“There are wet and dry mats to disinfect feet at the mall’s entrance. A UV scanner is present to disinfect personal baggage and there are touch-free hand sanitising stations too inside,” says Pooja Patti,centre director of Phoenix MarketCity and Palladium.

The number of people visiting, that is the mall density, is monitored via artificial intelligence sensors. Thermal cameras have also been placed at the entry. “There is a red signal with an alarm to indicate if the person’s temperature is higher than normal,” she adds.

Twenty-three-year-old Shreejay Munuswamy, a resident of Saligramam, visited Phoenix on the first day when the malls reopened. “It was not crowded… I went to the H&M showroom in Palladium to buy clothes,” he says.

How safe is trying on clothes for that perfect fit? That depends both on the mall’s SOP and the individual stores’ additional safety precautions. Mohammed Ali, chief operations officer of Forum Vijaya Mall says, “Some apparel brands are not allowing trials of clothes. Other brands are using sanitisation baskets near trial rooms. Customers are asked to put the tried clothes into the baskets. Those clothes are disinfected and kept back on the rack after two days.”

Soumit Banerjee, centre head for Marina Mall in Egatoor, says that the mall’s maintenance costs, including disinfection of floors and elevators by staff in PPE (Personal Protective Equipment), have gone up by 20%. 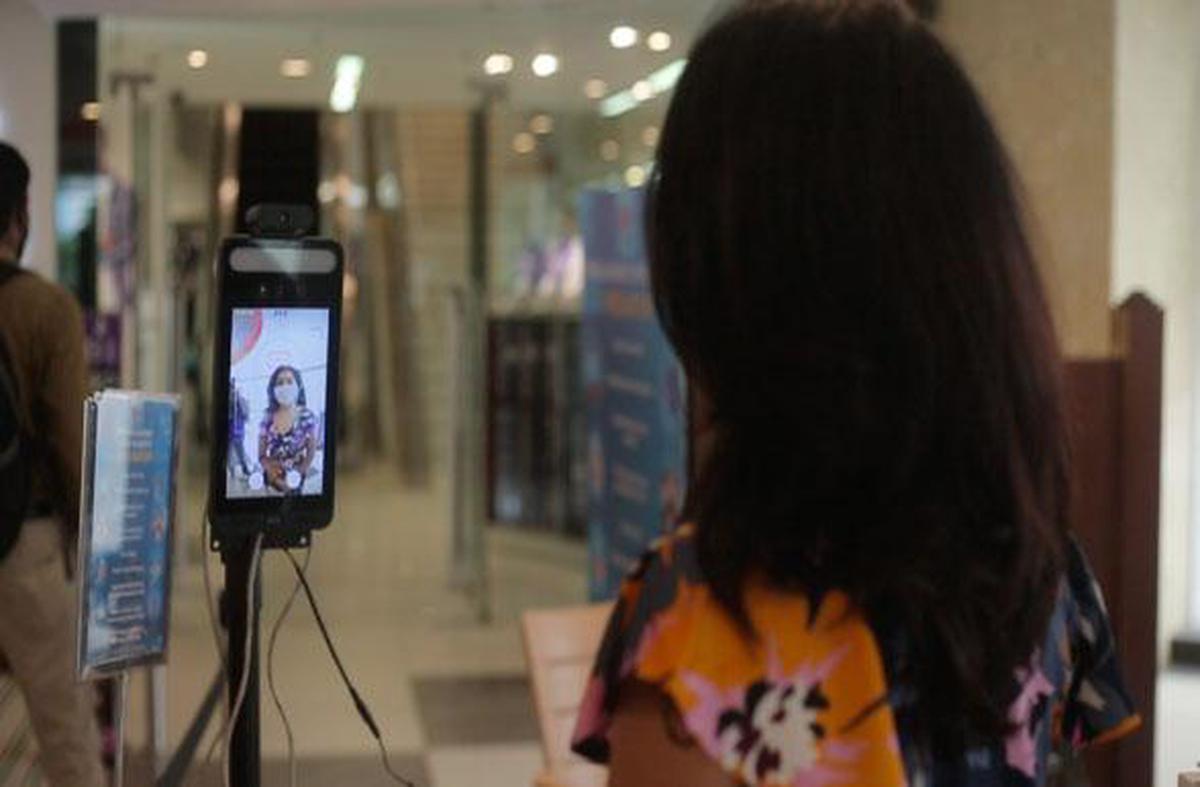 Meanwhile, in VR Chennai, Anna Nagar, stores are allowing only one customer per 75 square feet of space, and shoppers are provided with disposable gloves on request if they want to touch and feel the products.

All outlets at the food court at VR Chennai have reopened. At Express Avenue, operations to open the courts are currently underway. Shreejay, who dined at Pappa Roti during his visit to Phoenix says, “Apart from Pappa Roti and Starbucks, none of the other restaurants were open. The food at Pappa Roti was very good, but the choices were limited.”

Attention has also been paid to the washrooms. Express Avenue has made only alternate urinals and wash basins available for use. RK Devanathan, 26, from Chromepet, who visited Forum Vijaya Mall on September 2, says, “A red-sign board was put up outside the washrooms, and we were made to use only those urinals and wash basins marked with red-stickers. There were also green-stickers marking alternate urinals, so maybe they will be used at different times depending on their sanitisation.”

Express Avenue’s chief revenue officer Munish Khanna seems happy with the response they have got so far. According to him, in less than 48 hours since they opened their doors, Express Avenue managed to reopen 200 out of its 220 stores. “We have seen around 40% of previous year’s footfall in the first two days of reopening,” says Munish, adding, “It does not look like the mall was shut for five months.”