Care 4 Chendamangalam, which works with weavers in Kerala, brings the eponymous GI-tagged sari for a fund-raiser exhibition to Bengaluru

In the first week of June, the monsoon begins its dark, moody romance with Kerala; sharp showers slam the sodden ground like iridescent sheets of gunfire. It turns the coastal State an unnatural shade of green, a landscape of red earth and pouring rain.

Chendamangalam is a small town near Ernakulam that stands at the crossroads of three rivers and centuries of history and culture. Dotted with Jewish, Christian, Muslim and Hindu places of worship, the town was part of the ancient port complex of Muziris and known for its fine cotton spun here by the Devanga Chettiars, a community of weavers originally from Karnataka.

When the rivers ran riot during the Kerala floods of 2018, they not only threw sludge and mildew on the looms, yarns and finished goods of the Chendamanagalam cluster of weavers, they also took with them the dreams and future of a community already struggling to stay afloat.

Meera Mammen, vice president — welfare, MRF, woke up one morning in August that year, her WhatsApp flooded with appeals to save the weavers and their looms. When she visited the town, which has nearly 600 weavers, she was distressed by the extent of destruction and reached out to friends who could help. It resulted in an initiative called Care 4 Chendamangalam (C4C) helmed by Chennai-based trustees Preetha Reddy, vice chairman, Apollo Hospitals; Minnie Menon, jewellery designer; Thejomaye Menon, artist; and Shekar Sitaraman, hotelier, with Meera as managing trustee.

In a phone interview, Minnie Menon says, “Shortly thereafter, Shekar and I visited Chendamangalam along with Meera. We assessed the havoc — worksheds were damaged, stocks were soaking wet. The weavers who met us had a sense of helplessness. Some of the societies were decades-old. We felt the need to restore normalcy in their lives; after all handloom is our national heritage. We identified and adopted a cluster of 42 women weavers, because women — when they are breadwinners — ensure their earnings go towards providing their families with a better life.”

The GI-tagged Chendamangalam sari is recognisable by its puliyilakara border, a thin black line that runs abreast with the sari’s selvedge. With its extra-weft chuttikara and stripes and checks of varying width, its look has changed little since the time of the Paliam family, once prime ministers to the Cochin maharajas, who invited the Chettiars to settle here and produce these handcrafted treasures. 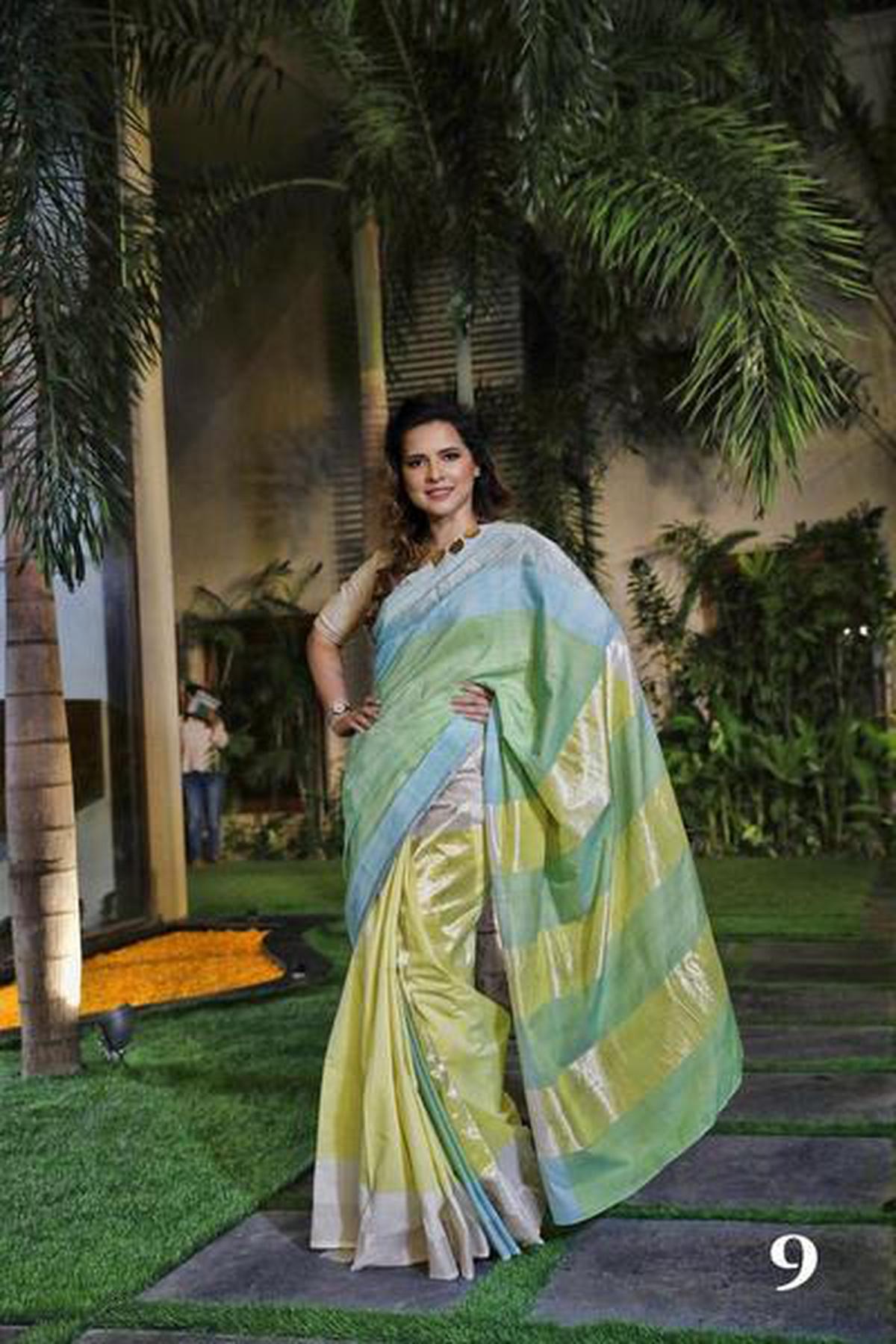 “The saris made from the fine-count cotton yarn of 120s, 100s and 80s take between two to four days of painstaking labour, depending on the design vocabulary,” says Minnie. “A three-year roadmap was drawn up and we requested established Kochi-based designer Sreejith Jeevan, founder of the city’s popular Rouka boutique, to come on board. We collaborated with him to ensure design intervention, to appeal to the younger generation and a pan-India audience. Innovations are consciously confined to the graphic-edged finishes and textures with the characteristic kasavu zari borders. The result is a chic new take on the classic, Kerala handloom sari seen through a modern lens.”

C4C started interactions with the society of woman weavers in January 2019 and hopes to help them reap benefits by 2021. “Our mission statement is to ‘Uplift, Upscale, Uphold’. The price range of the saris is between ₹3,300 and ₹7,500. We have held exhibitions in Kerala, and in Chennai and Coimbatore but we have not broken even yet; COVID-19 has certainly not helped either. Our first exhibition in Bangalore, is still part of the journey of recovery for the weavers,” says Minnie.

Kuttu atta vs. singhara atta: Which is better for weight loss?