Kareena Kapoor Khan, who made her debut on Instagram recently has been dominating the social platform like a queen. From giving all a glimpse into her life to sharing adorable pictures of her son Taimur, Bebo’s posts have been going viral on the internet.

Taking to Instagram, the mesmerising actress recently shared a picture of Tim holding his latest artwork. Calling the little one as the ‘Inhouse Picasso’, Kareena captioned the post as “Who’s the king of the jungle now? 🤭💯 #QuaranTimDiaries #InhousePicasso”

While Sonam Kapoor, Riddhima Kapoor Sahni, Amrita Arora and others were all praise for Tim’s creative skills, it was his elder brother Ibrahim Ali Khan‘s comment which grabbed out attention. While Ibrahim sent Tim multiple kisses, Bebo replied on his comment calling him ‘iggyyyy’ with heart emoticons. Check out their social media banter here: 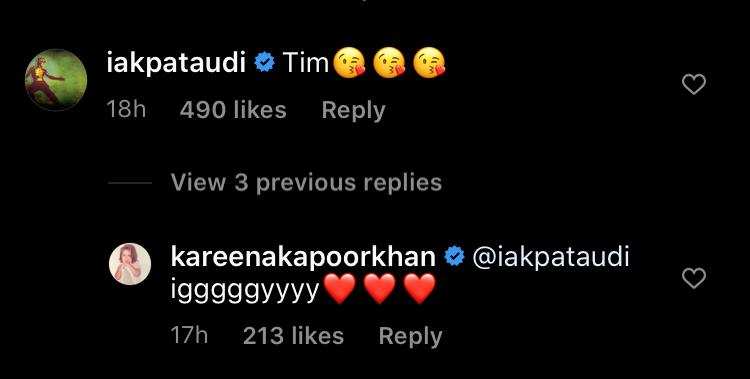 Meanwhile, Kareena and Saif Ali Khan, who are all set to welcome their second baby soon recently released a statement confirming the same. It read as “We are very pleased to announce that we are expecting an addition to our family!! Thank you to all our well-wishers for all their love and support.”

On the work front, Kareena is expected to wrap up the shoot of her upcoming project Laal Singh Chaddha soon. Apart from that, she also has Karan Johar‘s period drama ‘Takht’ in her kitty.

Richa Chadha thanks Sona Mohapatra: I fully support Payal Ghosh’s quest for justice, but I can’t overlook this vulgar, unwarranted personal attack on me...

Bhumi Pednekar on experimenting with her on-screen characters: I have a personal ambition to never fit in a mould as an artist | Hindi...