Home Life Style If a big earthquake hits, here are all the precautions you need...

After 10 low to moderate earthquakes over the past one and a half months in Delhi and National Capital Region (NCR), the state may see a major earthquake in the coming days, say experts from IIT Dhanbad’s Department of Applied Geophysics and Seismology.

An earthquake can happen any time, without any notice. The experts cannot predict the exact place and scale, but there is consistent seismic activity going on around Delhi (NCR), which makes it a topic of concern.

Here is a detailed plan about the things to do before, during and after an earthquake.

Before the earthquake
One of the most important ways to prepare for the tremor is by making your home as safe as possible. If your house is old, identify the potential weaknesses. The things inside your house are as important as the walls of the house. Take a tour of your house and look for stuff that can fall or break when the ground starts shaking. You can do a little reorganization by moving large and heavy objects to the lower shelves. You can bolt the bookcases to the wall and install latches on the cupboards.

Look for house appliances that you would need to shut when the earthquake hits. Do not forget to check the gas connection.


Assemble an earthquake emergency kit that lasts for at least 72 hours. This kit should contain water, food and other important supplies. Consider each member of your family while preparing the kit, including your pets.

What to do when it starts shaking
When you feel the tremors, protect yourself as quickly as possible. The National Disaster Management Division (NDMD) of Ministry of Home Affairs shares these three actions: drop, cover and hold, which are also called the triangle of life.

Drop: Get down on all fours (knees and hands) to protect yourself from being knocked over. This is an ideal position to crawl for shelter. 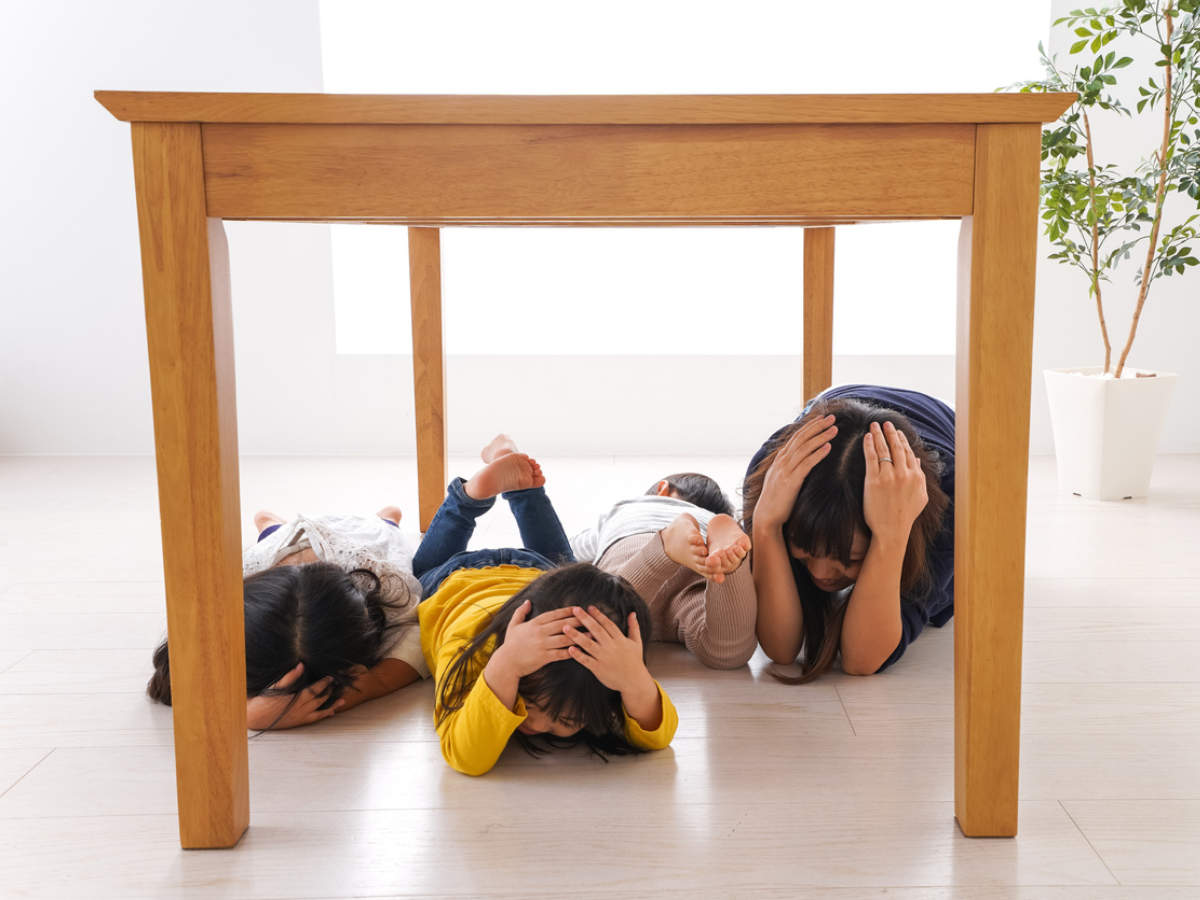 Cover: Place your hands over your head and neck to protect yourself from the debris. Stay under any nearby table or other shelter, until the shaking stops. If a table is not nearby, sidle up to one of your home’s interior walls, away from tall objects and furniture that might topple.

A common misconception is that doorways offer the best protection during an earthquake. But according to the Earthquake Country Alliance, if your house is very old, this does not hold true.

Hold: Stay still under the cover until the shaking stops. If you are under a table, keep holding it from one hand. If you are in open, continue to shield your head and neck with your arms.

If you are on a wheelchair


If you are on a wheelchair, lock the wheels and then lean over to protect your vital organs, including your head and neck.

What to do when you are outside


If you are outdoors when the earthquake hits, drop to the ground in a clear spot away from buildings, trees and powerlines.

If you are driving, pull over, stop and set your parking brake. Avoid bridges, powerlines. signs, buildings, vehicles and other things that can fall on your car.

What to do if you live in a high-rise building


People living in a high-rise building are unsure about should they stay in or step out of their building during an earthquake.

Staying outside and far from buildings is best during an earthquake. But crossing a building and its immediate surroundings during the earthquake is a terrible idea.

Most earthquakes don’t last long. How fast can you practically leave your building when the floor and stairs are moving unpredictably and the stuff and debris are falling on you?

Chances are you cannot make it all the way out from a high story building during a single earthquake.


In the worse case, if a building falls, a strong piece of furniture or a bathtub can provide a void space that can let you survive until the help arrives.

After the shaking subsides


Sometimes, even after the ground stops still, it is not necessary that the danger is over. When the earth settles from the trembling, it can produce a series of smaller quakes known as aftershocks.

In some rare occasions, a second earthquake is even bigger than the first. When this happens, the first quake is called a foreshock and the second temblor is called a mainshock.

Once the shaking subsides, first check for injuries. Sometimes people don’t initially feel pain because of the adrenaline that rushes through the body during life-threatening events. If you are inside a heavily damaged structure, get yourself and other our as soon as possible.

If you get trapped after the earthquake ends


If you get trapped inside your home or building, stay calm. With the help of your clothes or hands protect your eyes, mouth and nose from dust. Whistle or shout to get people’s attention. If you have anything around you that you can bang to make a noise, do that. Meanwhile, also keep an eye on other hazardous things like electrical lines that might have fallen, ruptured gas pipes and other precarious structures.

Avoid making these mistakes during an earthquake


According to experts from the University of Washington, people should be careful and avoid making two three mistakes during an earthquake.

Do not run to other rooms or outside when the earth is shaking: The shaking can make you fall. You can also run into flying and falling objects that can cause serious injury.


Do not stand in a doorway: Doorways in the modern house are not stronger than other parts of the house. By standing in the doorway, you are also at risk of being struck by falling or flying objects, which is the most common source of an earthquake injury.

Though the unpredictability of earthquakes is frightening, but with a little preparation, you can be ready if a big one strikes.

The right time to have dinner to lose weight

The right time to have dinner to lose weight