Bollywood actress Kangana Ranaut has reached out to Congress president Sonia Gandhi to step in and intervene after the BMC carried out a demolition drive at her Bandra office.

“Can you not request your government to uphold the principles of the Constitution given to us by Dr Ambedkar?”Kangana asked in a series of tweets on Friday morning.

The actress went on to tell the Congress party supremo that “being a woman” she may be “aware” of the struggles of women have to go through. Kangana said in a tweet, “Dear respected honourable @INCIndia president Sonia Gandhi Ji being a woman aren’t you anguished by the treatment I am given by your government in Maharashtra? Can you not request your government to uphold the principles of the Constitution given to us by Dr Ambedkar?” 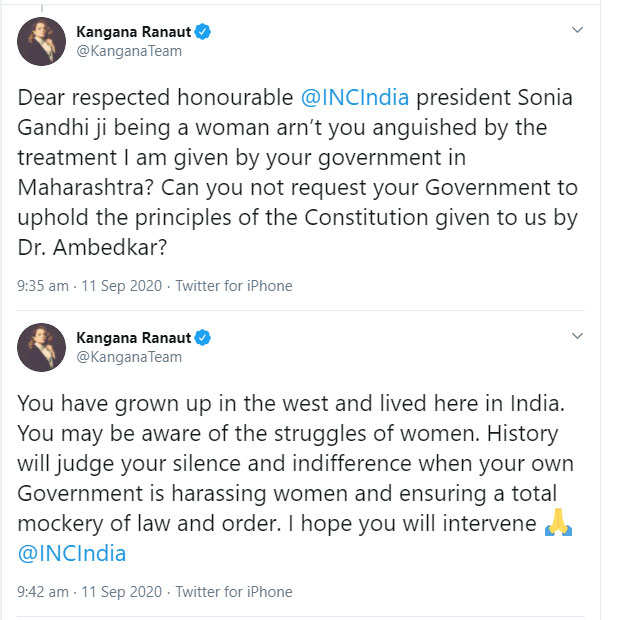 She went on to add, “You have grown up in the west and lived here in India. You may be aware of the struggles of women. History will judge your silence and indifference when your own Government is harassing women and ensuring a total mockery of law and order. I hope you will intervene.”

This comes a day after Kangana took to her handle to slam Maharashtra chief minister Uddhav Thackeray for allegedly carrying out vendetta politics and carrying out a demolition drive at her Mumbai office.

While the actress has claimed that the work carried out in her office was approved by the BMC, the civic body, on the other hand, in their notice, mentioned 14 violations after taking note of several “illegal” alterations.

Although rumours are rife that the actress’ actions and tweet have a political undertone, favouring one party over another, union minister Ramdas Athawale on Thursday said that Ranaut “is not interested in politics but in ensuring unity in society.”

“Kangana Ranaut said she is not interested in politics but is interested in ensuring unity in society. She said that in her upcoming film she is playing the role of a Dalit and that caste system should be abolished,” said Athawale after a meeting with the star at her residence.

UP News: Religious conversions; UP may bring ordinance | Lucknow News