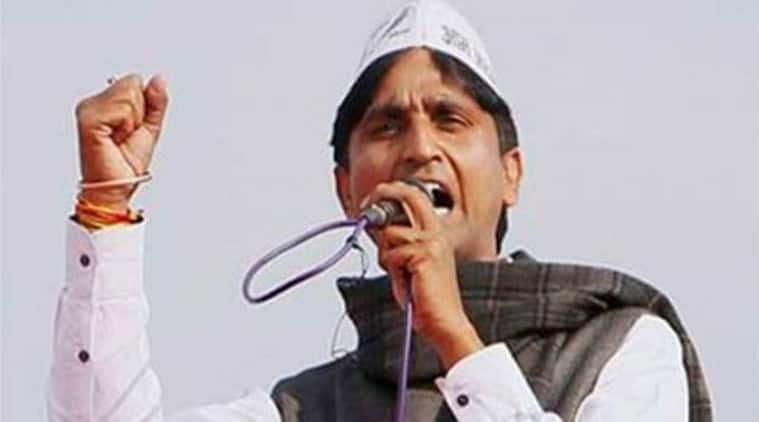 Kumar Vishwas should turn up and give his clarification, said an official of the DCW.

AAP on Monday strongly backed its leader Kumar Vishwas over a controversy surrounding the summon issued to him by Delhi Commission for Women on a party volunteer’s complaint, and accused the media of “twisting” the entire story to malign the party’s image.

Vishwas also termed the woman’s allegations as “baseless” and put the onus on Delhi Police which he said did not take any action on the woman’s complaint accusing four persons including a BJP spokesperson of maligning her image.

The woman has moved the Commission claiming that “rumours” of Vishwas having illicit relationship with her were ruining her reputation and that he should come forward to clarify.

“The story of a woman which is going on since morning… she had actually given a complaint to Delhi Police on March 31 in which she had named four persons, accusing them of maligning her image on social media. When nothing happened, she made a complaint to the woman commission,” said AAP leader Sanjay Singh said at a press conference here.

In any of the complaints, she has talked about any illicit relationship, despite that it is being made up as if an illicit relationship has been unearthed. The woman has complained about maligning her image. She has accused a BJP spokesperson of tweeting her photo, Singh said.

Defending himself, Vishwas said that the woman, who was an activist of the Aam Aadmi Party, registered a police complaint that some persons on social media are spreading lies against her, including a BJP spokesperson, that she has an illicit relation.

“She registered complaint 15 days back, but police have not taken any action yet. She had sent me a mail asking Kumar bhaiya, what should I do now? Thereafter, our AAP’s legal cell asked her to register an FIR in this regard,” said Vishwas, accusing the BJP of running a campaign against him.

“These allegations are totally baseless. I am hurt by these baseless allegations. During Delhi Assembly election, we were also defamed by the BJP to gain political gain. A private TV channel is running a baseless story against me… I have sent a defamation notice to it.”

Slamming Delhi Police, Vishwas said the woman in her complaint even named some persons who were defaming her but no action was taken against them.

Asked if he has received a notice of the Delhi Commission of Women (DCW), he said that he has not received any notice from the DCW. “We do not fear such allegations. The woman has already rejected all these allegations,” he said.

DCW has issued summons to Vishwas and his wife.

AAP leader Singh advised the media to refrain from targeting the party without evidence and to spare family members of party leaders.

“If there is a premeditated strategy to target AAP then, please don’t be part of it. If there is any evidence, if you have facts, then please run a story. But please don’t run cooked up stories where the fact is something and something else is being run,” said Singh.

“It is my humble request to friends in the media. If we are wrong, do run a story, crucify us, we have no problem. But kindly spare our families, our wives, our children get hurt by these stories, please spare them,” Singh added.

J&K: Four get death for rape-murder of minor