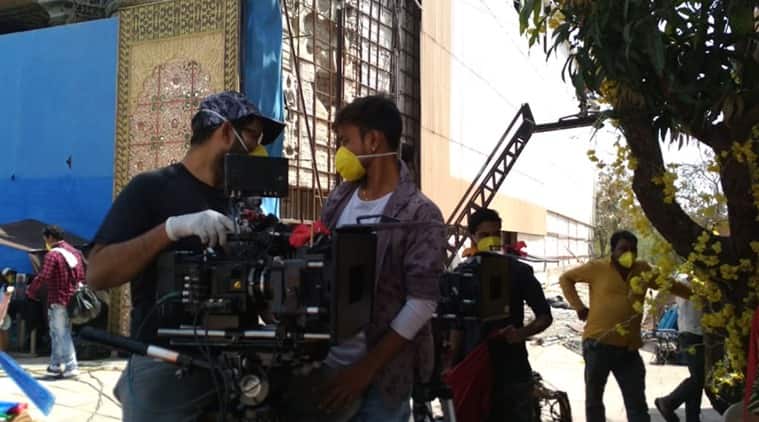 The order issued by Maharashtra government stated that social distancing norms will have to be followed strictly with focus on personal hygiene.

Maharashtra government on Sunday announced film and television shooting could resume in non-containment zones as a part of the relaxations that the state would undergo in June.

The state government issued a 16-page long set of guidelines for producers to follow as and when they begin film and television production. The guidelines include maintaining 33 per cent crew (which will not include the main cast) on set, all staff members to carry identification cards and Aarogya Setu app downloaded on their compatible devices.

Ambulance, doctors and nurses are compulsory inclusions on the sets, while a dedicated personnel would be required to check the temperature of cast and crew. Any pregnant employee or an employee whose spouse is expecting will not be allowed on the set. Actors above the age of 65 will not be permitted on sets, while no audience will be allowed for fiction or nonfiction programming.

The Maharashtra government has also asked the producers to avoid the habit of open calls but assign time windows for everyone to arrive on the set. For casting directors, the guidelines include encouraging auditions digitally and in case of distributing hard copy of scripts, disposing paper after every reading. The government said when casting for families, actors’ real family members should be considered so that physical contact remains within a given set of people.

The shooting will take place in a fully locked down premise, which will have to be gated and secured throughout the day. Besides the compulsory six feet distance between the crew members and wearing masks, all doors and gates will be manned by security guards to minimise touching of the doors and handles.

No elaborate sequences like marriage, market or fight are permitted till the coronavirus threat subsides. Artistes have been asked to reduce their support staff to one on sets. Ideally, the same staff member should do the artiste’s hair and makeup. The state government has suggested makeup tools should be assigned to actors to avoid cross-contamination.

While all trials and fittings would be at the actor’s residence, look tests should take place on video calls. Junior artistes should be discouraged or minimised. For outdoor locations, alternate lodging should be provided to house occupants for the duration of the shoot.

Any talent or crew member, who returns from a place where the virus is spreading, should monitor themselves for symptoms for 14 days and check the temperature twice a day. In case anyone on set tests COVID-19 positive, the person should be isolated, and the set vacated immediately. Shooting will be halted for three days and resumed only after safety checks.

For the permissions to resume shootings, producers will have to apply to managing director of Maharashtra Film, Stage & Cultural Development Corporation Limited, and to district collectors outside Mumbai.

The entertainment industry has welcomed the state government’s decision and guidelines.

Maraṭhi film and TV producer Nitin Vaidya, who is also a member of Indian Film and TV Producers Council, told indianexpress.com that the development came as a huge sigh of relief for the industry.

Vaidya said, “We are happy that such a decision has come in so early in our talks with the government. This is lightning speed. All the technicians, writers, artistes had been wondering when our work would resume because their lives had come to a standstill over these two and a half months. We don’t have any tentative date, but it’s up to broadcasters to procure the necessary permissions to get production started.”

Nitin Vaidya also addressed the guideline barring actors above the age of 65 from sets, saying that there’s an understanding between the industry and the government that if necessary, permissions can be sought to include such actors in shoots.

He said, “We will, of course, avoid casting actors above that age because they are more prone to coronavirus, but we have been told that in urgent cases, we can seek permission from the government and include them strictly following precautions.”

Would like to express my sincerest gratitude to the honourable @CMOMaharashtra UddhavJi, for considering our requests to begin work in a phased out manner by easing restrictions on films and television shooting. (1/2)

Another TV producer shared with indianexpress.com, “The producers will start applying for permission from their respective district administration. Some sets would also need repair. We would need to get the cast and crew ready, and also the scripts. Can’t give a date but we should roll out at the earliest following all SOPs.”

Ratna Pathak Shah: Scripts we get today are significantly better