Chinese smartphone maker OPPO on Monday unveiled its ColorOS 11 custom user interface (UI) for Android smartphones. Based on Google Android 11, the UI is currently available in beta for select OPPO smartphone users. The ColorOS 11 will be released in graded manner, starting with the Find X2 series and Reno3 series smartphones. OPPO aims to rollout the upgrade to around 28 OPPO phones, including the ones in its Find, Reno, F, K, and A series.


Customisation is one of the major themes of the ColorOS11. The UI brings tons of customisation features for the select OPPO smartphones user to personalise the look and design of their smartphones. From custom font to custom colour theme and wallpapers, most of the UI elements in the ColorOS11 are customisable. Moreover, the upgrade brings enhanced ‘Dark Mode’ with three colour schemes and levels of contrast.

Besides, the ColorOS 11 integrates Google Lens in its three-finger screenshot feature. This allows users to translate text through a simple screenshot taken with a three-finger gesture. Flexdrop is another feature that debuts with the OPPO ColorOS 11. This feature is aimed to make multitasking easy and convenient, especially for gamers and multimedia enthusiasts. 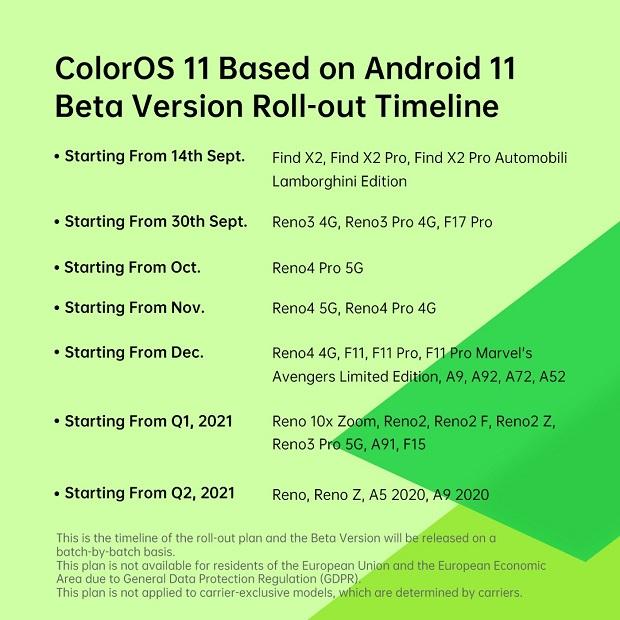 As for the privacy and security features, the ColorOS 11 incorporates stock Android 11’s privacy options. In addition, OPPO adds ‘Private System’ feature that creates a separate system where a second version of apps and data runs independent of the original, and is accessible only via a separate fingerprint scan or password. Moreover, app permissions system has been enhanced, with temporary permissions that reset camera, microphone, and location access when the app is closed. OPPO has also added auto-reset permissions feature that resets apps permission settings if the app has not been used in a long time.


With regard to India-centric additions, the ColorOS 11 brings ‘Low Battery Message’ feature that provides user option to send a message to its contacts with current location details when the phone battery drops to 15 per cent. According to OPPO, this safety feature has been designed post inputs from users in India and is currently available only in the Indian market.

US imposes restrictions on transactions via WeChat, curbs on TikTok

Famous celebrities who married their way into royal families

4 things you need to teach your kids by example

5 ways you can use Neem for flawless skin and luscious...