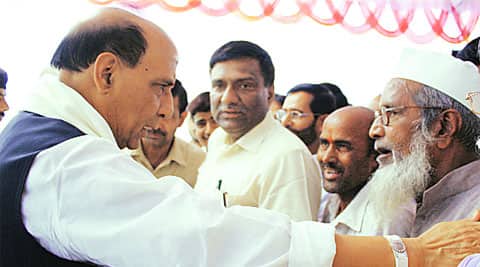 Addressing a meeting of party workers at Saraswati Sishu Mandir, a school of RSS, Shah said party needs to win maximum seats in UP to get power in Delhi and that was the reason Rajnath has been fielded from Lucknow.

In his address, Rajnath said that he considers sitting Lucknow MP Lalji Tandon as his patron. He also claimed, “I have always decided that I will contest from any seat where the number of people from my caste will be minimum.” He announced to file his nomination in Lucknow on April 7.

About the reports of terror threat to Modi, Rajnath said, “Will now victory be gained by violence?” He also said that BJP and its alliance partners will win at least 15 seats in Tamil Nadu and more than 30 seats in Bihar.

Lucknow MP Lalji Tandon, who was sore after he was denied ticket from Lucknow, today said that he was happy to hand over the responsibility of Lucknow to Rajnath.