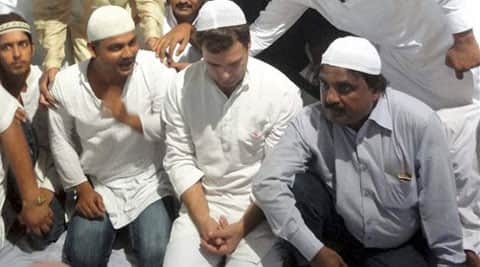 Congress Vice President Rahul Gandhi on Saturday called for an end to the “politics of hatred” in the country as communal tension flared up in Uttar Pradesh while his party accused BJP of carrying out “pre-planned communal polarisation”.

“I am deeply saddened to hear of clashes in Saharanpur. Violence, divisiveness and hatred have no place in our country. This politics of hatred must end. I appeal to every one to remain calm and refrain from fanning communal passions,” Gandhi said in a statement here.

Two persons were killed and at least 12 others injured in a violent clash which broke out between two communities over a land dispute in UP’s Saharanpur, prompting authorities to impose curfew in the district.

Congress hit out at BJP over the clashes in UP with party spokesperson Anand Sharma saying, “There is an attempt of communal polarisation in the country in a pre-planned manner. BJP was saying different things during the election campaign,  but they brought communal politics in a very subtle way. Now, it is brazen.

“In the little over two months that they have been in power, the country has seen flare-ups, tensions, destruction of places of worship, not only in UP but in different parts of the country. The right has now assumed a threatening posture which militates against our composite culture and secular fabric.”

Stating that “religion cannot be used to create polarisation”, Sharma said that Congress does not promote communal politics and respects all religions.

UP Chief Minister Akhilesh Yadav directed senior state home department officials to handle with a firm hand the situation in Saharanpur and in Moradabad, where Congress, BJP and VHP had planned political meetings on Saturday.

Sharma, meanwhile, defended Congress’s decision to hold a ‘peace march’ in the UP.

Congress leaders Madhusudan Mistry and Nagma were today detained in Ghaziabad when they were on their way to Moradabad to take part in the march.

Authorities had on Friday imposed prohibitory orders in Moradabad to prevent any untoward incidents in the area with VHP, BJP and Congress having planned marches in Kanth town on Saturday.

On July 4, clashes had erupted between BJP workers and police in Kanth over a mahapanchayat called by the party to protest against the removal of a loudspeaker from a temple.

Asked whether it was BJP’s game plan to bring President’s Rule in UP, Sharma said, “I can’t speak for them as to what their conspiracy is. I can only comment on what is apparent on the surface.”

To a question on whether the Narendra Modi government was doing a U-turn on Pakistan by sending representatives to hold talks with the neighbouring country even after two ceasefire violations, Sharma said, “This government and Modi, in particular, were always rabble-rousers.

“Now we have to hear from him as to what would be his diplomacy and approach. We have not heard much of it except the invitation that he sent to the Prime Minister of Pakistan and leaders of all SAARC countries.”

When the previous UPA government was in office, BJP and Modi used to claim it was weak and timid whenever there was any ceasefire violation, Sharma reminded while asking the government to take steps to prevent such incidents.

Train mishap: Modi offers condolences to kin of those killed

Try these 5 appetizing snacks to prepare with leftover roti

How long should you stay in the sun for better health