CHENNAI: Legendary playback singer SP Balasubrahmanyam, popularly known as Balu and SPB, who enthralled millions of people with his youthful voice, died at 1.04pm on Friday while undergoing treatment for Covid-19 at a Chennai hospital. He was 74.

“In a further setback this morning, despite maximum life support measures and the best efforts of the clinical team, his condition deteriorated further, and he suffered a cardio-respiratory arrest. With profound grief, we regret to inform that he passed away…” said a release issued by MGM Healthcare assistant director Dr Anuradha Baskaran.

SPB’s son and singer S P B Charan thanked everyone who prayed for his father. “I thank doctors and nurses who took care of him. He is everyone’s property. My dad will be alive until you are there,” he said.

The body was brought to the singer’s home at Kodambakkam around 4pm. The last rites will take place at his farmhouse in Tamaraipakkam in Tiruvallur district at 11am on Saturday.

SPB, who sang more than 40,000 songs in a career spanning nearly 55 years, had been undergoing treatment in MGM Healthcare since August 5.

SPB was admitted to hospital with “mild” symptoms of Covid-19. The same day, the singer posted a video on his social media page. “Last two to three days, I have been having a little discomfort. Discomfort means little chest congestion, which for a singer is nonsense,” SPB said in his video message. 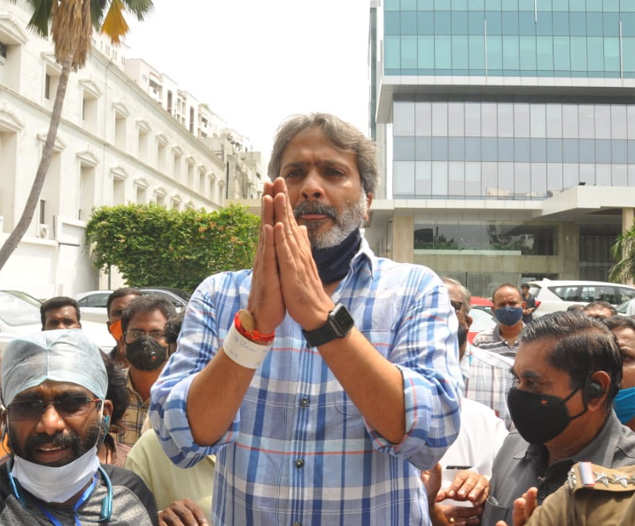 
SPB said he had a bit of phlegm with cold and fever.

“I am perfectly alright except the cold and fever. Fever has also subsided. In two days, I will be discharged, and I will be home. Lot of people have been calling me. I couldn’t attend all the calls. I have come here mostly to take rest, so there won’t be any disturbance to me, and to take medication. Don’t bother calling me. I am fine. I will be fine,” he said. Those were the last words his fans heard from him.

On August 13, after his oxygen saturation dropped, he was moved to the intensive care unit and was put on life support. His condition remained critical although he was stable. The singer’s son S P Charan released video messages assuring people that he was hopeful that his father would recover from the viral infection.

Doctors said they were taking a multi-disciplinary approach to manage his condition. They were collaborating with national and international experts to save SPB who was on ventilator and ECMO on his last days.

On September 8, the hospital said SPB would warrant extended stay in the intensive care unit. On September 19, his son said his father’s condition was improving although he was still on life support. “He started oral intake of food since yesterday. That should help him grow stronger and take care of other vitals also,” he said.

However, on September 24, the hospital said Balasubrahmanyam was “extremely critical”.

Doctors said the singer, who was on the road to recovery, suffered a brain haemorrhage. He was put on maximal life support. A day later, he passed away.

SPB is survived by his wife Savithri, daughter Pallavi and son Charan.

Sripathi Panditaradhyula Balasubrahmanyam, who was born in a Telugu Brahmin family in Nellore district of Andhra Pradesh on June 4, 1946, made his debut as a playback singer in 1966 with the Telugu film “Sri Sri Maryadha Ramanna.”

A versatile singer, languages were no barrier for him. He commanded a fan following across 16 languages, especially in all four southern languages besides Hindi, where he made a mark for himself in the 1980s and 1990s – starting with the songs in “Ek Duje Ke Liye” which also marked the start of his tryst with the national award for playback singing.

Padma Bhushan SPB left a mark not just in film songs, but also in classical music despite no formal training in that genre. If Telugu film “Sankarabharanam” endeared him to admirers of Carnatic music, playing his “Lingashtakam’ and ‘Bilvashtakam’ album in Telugu for Lord Shiva became a daily ritual in many homes.

SPB composed music for around 45 films in Telugu, Kannada, Tamil and Hindi.

While Rajinikanth reigned supreme as a superstar, fans used to look forward to his opening song sung by SPB. Sentimentally, they believed that Rajinikanth’s films without SPB’s opening song would inadvertently fail.

Known for his humility, SPB never lost his voice till the end. When music composer Mickey J Meyer wanted to replay an old Telugu hit “Elluvochi Godaramma” from the 1982 film “Devatha” for “Valmiki’, a remake of Tamil film “Jigarthanda,” he got SPB to record the song once again, while retaining P Susheela’s voice from the original song. The song released in September 2019 became an instant hit and a rage in Telugu.

“I have come here mostly to take rest,” said SPB in his last message to thousands of his fans. As fans bid ‘Rest in Peace,’ they are soothed by the lines “Indha thegam maraindhaalum isaiyaai malarven” (I will blossom into music even if this body disappears) in the SPB song “Sangeetha Megham” (from the Tamil movie “Udhaya Geetham”).

Hrithik Roshan’s mother Pinkie Roshan shares a post on Sushant Singh Rajput: Everyone wants the truth but no one wants to be honest |...

Coronavirus: Subtle signs that can tell you have already had COVID-19 before